The police in Hong Kong said there were 20,000 took it to the street yesterday, but being there from the early time (skipped the rally, but went straight to the Government Headquarter) to observe the flow, I am pretty sure that the number was closer to 80,000 or even 120,000.

Why did people take it to the street? According to BBC: “Thousands of people have taken to the streets of Hong Kong to protest against what they see as a lack of government transparency and accountability”. My attention was drawn to two words in this sentence “they see” – It’s either the journalist failed to investigate into the core of the issue, or they simply cannot be asked to report about Hong Kong properly. If that’s the case, do us all Hong Konger a favour, don’t report at all.

There’s a trend here, since the handover of sovereignty:

Exactly why ATV still holds one of the two free-to-air TV channel licenses is beyond believe. Bear in mind the fact that HKTV only applied for an free-to-air TV license that does not take up any of the public air wave, meaning that even if HKTV can get the license, people won’t be able to watch any of the programmes without a decoder box.

Reports have been leaked, and all pointing to the fact that the recommendation made by independent consultant(s) and Executive Council’s original proposal was to issue licenses to all three applicants, including HKTV. Why the sudden change of tune? Why only iCable and PCCW, two telecommunications giants that have pretty much dominated the industry for years, are granted the licenses?

Ricky Wong, HKTV’s founder, years ago founded CTI which basically targeted the telecommunications industry and forced the then monopoly, PCCW, to engage in a price war – introducing competition in the market and bring the service prices of  internet and international direct dial (IDD) down dramatically. We used to pay US$2 a minute for IDD back then if not more. Now, we can spend no more than US$0.1 a minute!

Combining the fact that Li Ka-shing, the ultimate owner of PCCW, had been saying to the market that he’s going to sell off a couple local businesses, including ParkNShop, which triggered the market’s nerves – IS LI KA-SHING RETREATING FROM HONG KONG?

Coincidentally, Li announced that he’s not selling ParkNShop after all, soon after the license was granted to PCCW.

This is only one conspiracy theory, but I believe there’s a lot more behind – the China government has no doubt be involved in the TV license matter. Why would China, which has been suppressing the language and the free thoughts of Hong Kongers, be happy to see a TV channel that only service the people of Hong Kong? Soft power can easily be created once again if Hong Kong’s TV drama became internationally recognised – back in the 70s and 80s, Hong Kong movies, TV series and songs were known to our neighbourhood countries (Japan, Malaysia, Korea, etc) as well as the Western countries. This has long gone.

Once again, I cannot help but start to feel the creepiness of this all – about how a tyrannical regime controls the people by altering the language and making it impossible for the people to think…

Mind you, as long as the Chinese government continue this global brainwashing programme, the free thinkers in the world will cease to exist… Doesn’t take too long, a couple of generations, all people fought for and democracy and freedoms that you and I cherish will perish.

I’m not sure if you’ve experienced a demonstration or a rally in Hong Kong. The script is pre-set, and that’s exactly why we still haven’t achieved anything from all these festival and weekend parades:

First people walk from Victoria Park or thereabout, then arrive at the Government Headquarter or China-Hong Kong Liaison Office, then shout slogans a little, then start singing songs (same old songs every year, including “Do you hear the people sing”, I kid you not), then the organiser would announce “Our voice has been heard. We’ve achieved interim progress. We shall continue to fight, but now that we should all rest before the next round of protest.”

There organisers are the pseudo lift-wingers (I’d try to write a bit more about this), that the Hong Kongers called them “left plastic”. “Plastic” in Cantonese is “Gaau1”, and it sounds just like 鳩 (Gau1), a rude word that refers to penis, but most often used to refer stupid, dumb and useless gits. So instead of “swearing”, we often call someone “plastic” if he/she does something dumb – the full term, in case you’re interested, is “Ngaang6 Gau1”, which literally means “hard plastic”.

Here’s the emotion icon for of calling someone “hard plastic”, widely used in Golden Forum, and can simply be replaced by this one :o) 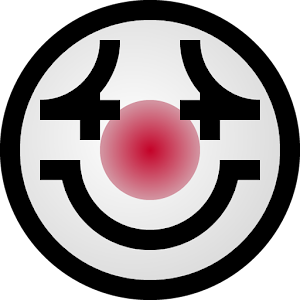 So these “left plastics” aim at essentially achieving nothing – in any society with 100,000 people participating in a demonstration, it can essentially overthrow a government. Not in Hong Kong! These left plastics aim at raising money for themselves (obviously) and most importantly “raising their own profile” and created the illusion that they represent the people of Hong Kong, and the proxy of all social movements.

At the demonstration yesterday (20 Oct 2013), however, when two of these left plastics (they are new faces, as the public resentment against the well known left plastics grows) hijacked the stage of the HKTV staff (started encouraging people to leave the government HQ and proposed their “plans” as if they are in charge of the movement), someone went up to the stage and tell them to stand down and give the stage back to HKTV which should be in charge. This brave man has done a good job by telling them off, and was supported by many. There was a little incident happened at the same time that NO MEDIA reported – another young man went up to the stage and waved the pre-97 Hong Kong flag (with the union jack at the corner), and shouted “Hong Kong should declare independence!”.

Of course he was arrested#, but I wonder what happened to him?

Tonight is probably the first ever time that the people of Hong Kong has achieved a Facebook record.

Over 160,000 “Likes” were recorded less than FIVE HOURS after the page the Support HKTV was created on Facebook when the HKSAR Government announced that two new licenses are issued to Now TV and iCable. The application submitted by HKTV, founded by Ricky Wong, was denied.

The HKSAR Government refused to give any explanation on why the license was not issued to HKTV despite it was the first to apply amongst the three companies and that the company has already produced a number of dramas (HKTV promised not to have a news channel). Over a billion USD has been invested by the founder of HKTV, and the HKSAR Government granted HKTV a plot of land to establish its filming and broadcasting facilities years ago. It is awkward for the government to encourage HKTV to invest and continue to invest in a new TV channel but denied its application after years of waiting (and during these years, the channel has not stopped to produce programmes that trailers and episodes have received public support).

Going through old news and information available, it seems that the reason is clear despite the fact that the government refused to give an explanation…

In 2008, Ricky Wong joint ATV (a local TV channel infamous for its blinded pro-China and communist stance) and declared that he’d undergo a major reform: “ATV is not going to be CCTV’s Channel 10” and “ATV will not rely on advertisements placed by Chinese companies”. He was later on “resigned” from his position because of controversial comments he made.

This (not backing CCP/China) is something that surely would upset China, and it is in CCP’s nature not to forgive. So naturally, the HKSAR (aka HKSARCCP) Government would be told/informed/warned that a free-to-air TV license must not be issued to Ricky Wong, an “anti-revolutionary”! They want to get rid of him for good, so lured him to invest and it is possible that he would go bankrupt and HKTV will be gone – the set up of HKTV have essentially broke TVB’s monopoly (let’s face it, no one watches ATV really), actors left TVB because of the unfair and harsh contract terms (e.g. not allowed to speak Cantonese in any broadcasting channels even though many actors don’t speak Mandarin) – they stayed purely because there are no other options in the market.

For years, TVB and ATV are being accused of reporting news that are often taken out of context or sometimes have misleading/incorrect information. ATV, particularly, for its appalling productions (there aren’t many really), have been asked to close down for years – they broadcast the same programme over and over again for years, and repeat the same programmes within the same week. By controlling the media, the HKSAR Government essentially controls the way people think.

This is just a brief view on this news. Let’s see how this unfold.